A lot of actors cashing in on the epidemic

The virus spreads around the world, along with a bunch of disinformation and potential malware / phishing campaigns. There are many actors, pushing many narratives — some similar, some different.

Interestingly, the three big players in the information warfare space — Russia, Iran and China seem to be running similar stories on their state-backed media outlets. While they all tend to lean towards the same, fairly anti-U.S. sentiments — that is, blaming the US for weaponizing the crisis for political gain — Iran and Russia’s content come off as more…conspiratorial. In essence, they claim that the COVID-19 virus is a “bioweapon” developed by the U.S.

Show of hands, who isn’t going to be surprised if it ever gets revealed that #coronavirus is a bioweapon?

RT also published an article mocking the U.S. for concerns over Russian disinformation. Another article by RT, an op-ed suggests the virus’ impact on financial markets might bring about the reinvention of communism and the end of the global capitalist system. Russian state-sponsored media can also be seen amplifying Iranian conspiracy theories — including the Islamic Revolutionary Guard Corps’ (IRGC) suggestion that COVID-19 is a U.S. bioweapon.

Iranian media outlets appear to be running stories having similar themese, as well. Here’s one by PressTV, where they very boldly claim that the virus was developed by the U.S. and/or Isreal, to use as a bioweapon against Iran. Another nonsensical piece by PressTV suggests that “there are components of the virus that are related to HIV that could not have occurred naturally”. The same article pushes another theory:

There has been some speculation that as the Trump Administration has been constantly raising the issue of growing Chinese global competitiveness as a direct threat to American national security and economic dominance, it might be possible that Washington has created and unleashed the virus in a bid to bring Beijing’s growing economy and military might down a few notches. It is, to be sure, hard to believe that even the Trump White House would do something so reckless, but there are precedents for that type of behavior

These “theories”, as is evident, are getting wilder and wilder.

Unsurprisingly, China produces the most amount of content related to the coronavirus, but they’re quite distinct in comparison to Russian and Iranian media. The general theme behind Chinese narratives is critisizing the West for…a lot of things.

Global Times claims that democracy is an insufficient system to battle the coronavirus. They blame the U.S. for unfair media coverage against China, and other anti-China narratives. There are a ton other articles that play the racism/discrimination card — I wouldn’t blame them though. Here’s one.

In the case of India, most disinfo (actually, misinfo) is mostly just pseudoscientific / alternative medicine / cures in the form of WhatsApp forwards — “Eat foo! Eat bar!”.1

I’ve also been noticing a ton of COVID-19 / coronavirus related domain registrations happening. Expect phishing and malware campaigns using the virus as a theme. In the past 24 hrs, ~450 .com domains alone were registered. 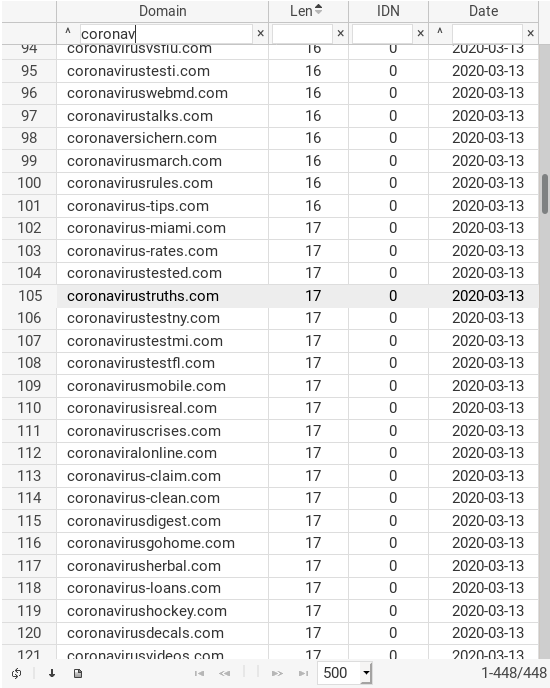 Anywho, there are bigger problems at hand — like the fact that my uni still hasn’t suspended classes!